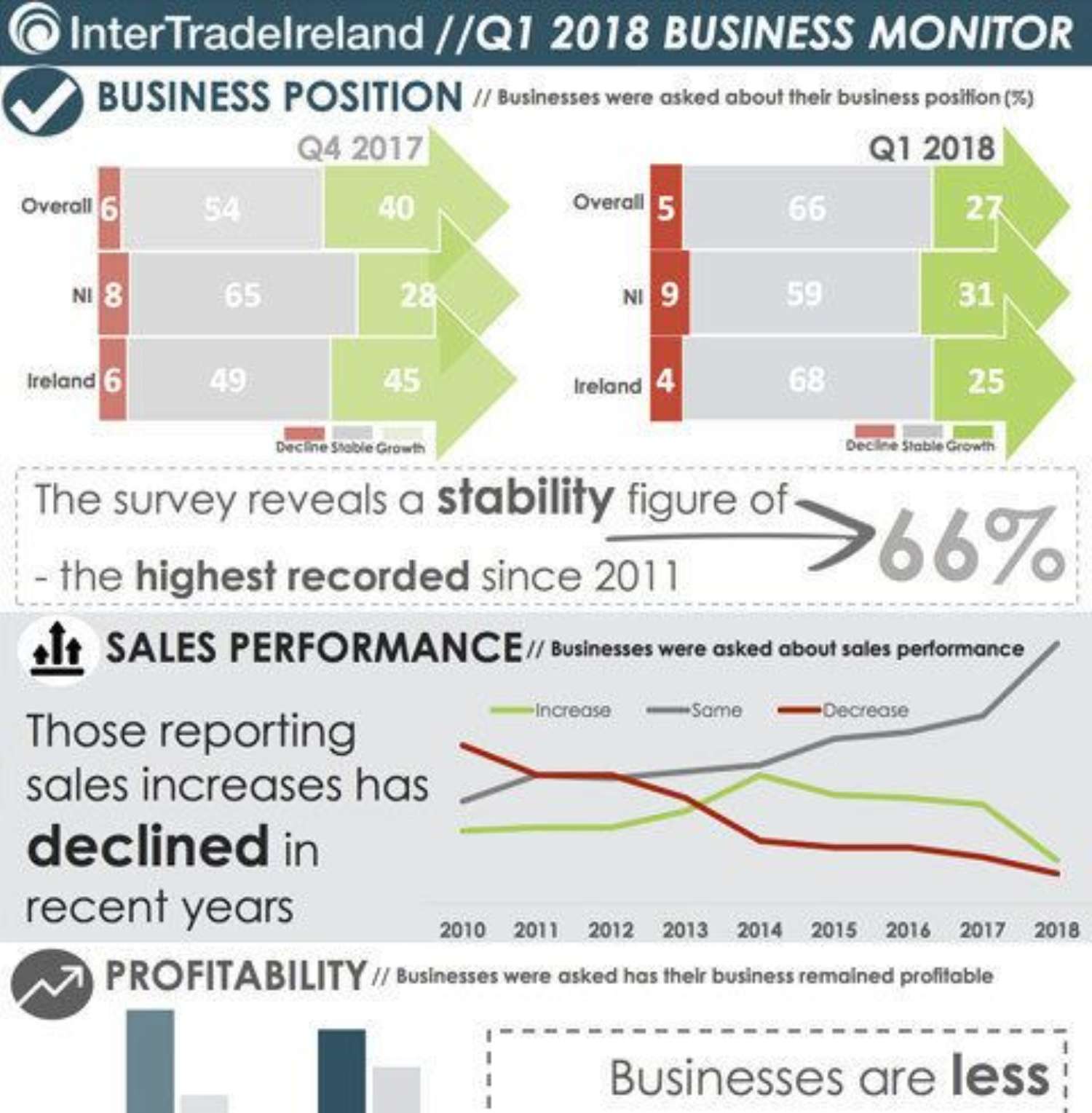 The latest quarterly (Jan-March 2018) InterTradeIreland Business Monitor Report shows that the majority of firms across the island remain very stable, however levels of growth are declining sharply in Ireland. This is consistent across companies both large and small. While not a cause for concern at the moment, it would appear to indicate that we are beginning to enter a critical phase of the economic cycle, with businesses across the island taking a collective pause on many key decisions.

Digging into the data it appears that the movement from growth to stability is almost entirely a Republic of Ireland phenomenon with a lot of business now adopting a “wait and see” attitude. Many companies are working at full capacity (53%) and 55% of businesses are profitable. While this, at face value is positive, there are underlying indications that a transition could be afoot. In Ireland and Northern Ireland few firms are hiring extra staff, or making investment decisions and business and consumer confidence is increasing as a concern across all industries.

In particular, construction is feeling the pinch at the moment, with a significant drop in those in a growth position, falling from 42 % last quarter to 16% this quarter. Over 1/5 in the sector are operating below capacity and only 4% are reporting an increase in sales.

Aidan Gough, InterTradeIreland’s Designated Officer and Director of Strategy and Policy said “Overall, there is a sense that business across the island is holding its breath and we are at a cross-roads. This number of businesses reporting to be in stability mode is the highest level since we began recording business position in 2011. While this is in no way cause for alarm, we also see that companies in growth mode is at the lowest mark since 2009. Firms are operating against a back-drop of increasing pressure on the high-street, the spectre of inflation, salary increases and uncertainty around Brexit. It is understandable that many businesses at this juncture may be feeling hesitant.

With hiring flat, staffing is likely to further come into the spotlight with the impending Brexit. 13% of businesses with cross-border sales have staff in the opposite jurisdiction and 15% of those in the leisure industry in Northern Ireland have staff from the rest of the EU (outside of the UK and Ireland).

Not surprisingly, exporters and those with cross-border sales are indicating they will be most impacted by Brexit, with 21% already seeing a negative impact.

In general, the level of preparedness for business around Brexit has improved but continues to be low, with just 8% of cross-border traders having a plan in place for Brexit.

In contrast 55% of companies across the island are prepared for the changes to GDPR, which has a specific deadline of later this month and is perhaps indicative of the importance of certainty in planning decisions.

InterTradeIreland has a Brexit Advisory Service which offers bespoke help and assistance for SMEs, including a £/€2,000 Brexit Start Planning Voucher, which allows individual firms to work with an approved panel of experts to devise a tailored action plan.

A copy of the 2018 Q1 InterTradeIreland Business Monitor Executive Summary can be downloaded below.